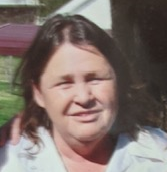 Sheila was a lifelong resident of Kingsport. She was the daughter of the late Tony and Eva Cassidy.

Sheila had twenty-five plus years of service at Wal-Mart. She loved being around children, grandchildren and her great grandchild.

In addition to her parents, Sheila was preceded in death by two sisters, Audrey Gilliam and Mary Ann Cassidy; two brothers, Clyde Cassidy and Timothy Cassidy.

In lieu of flowers the family requests that you take a small child out and play with them, which would be Sheila’s wishes.

There will be no formal services.

To send flowers to the family or plant a tree in memory of Sheila Ferguson, please visit Tribute Store

Share Your Memory of
Sheila
Upload Your Memory View All Memories
Be the first to upload a memory!
Share A Memory
Send Flowers